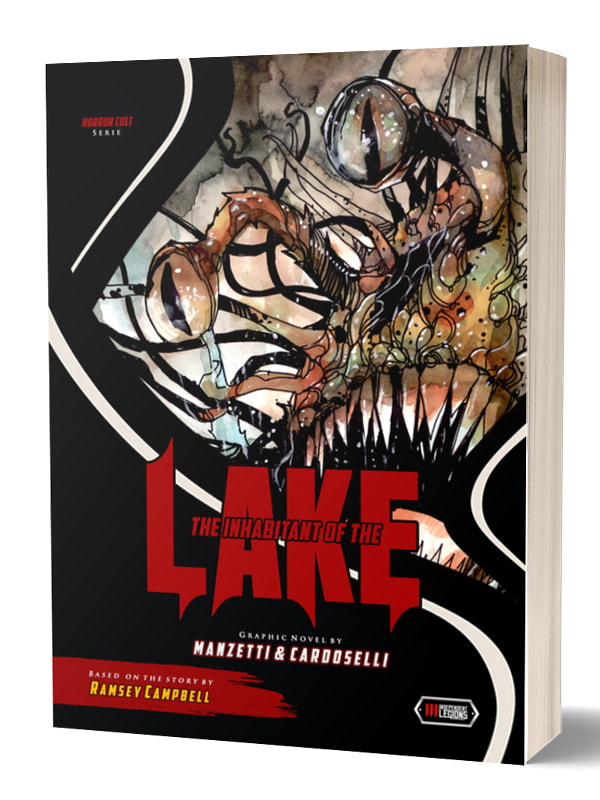 THE INHABITANT OF THE LAKE Graphic Novel by Manzetti & Cardoselli

A young artist escapes the crowded city to create in the peace and quiet of his new home in a remote, abandoned area. Drawn to the solitude and atmosphere of the thick woods and large, dark lake, he has no idea that far from being alone, he in fact has many, many new neighbours. Strange beings stare across at his home from behind the shadowed tree line, and he can’t shake the sense that something in the lake is watching him. When Cartwright’s dreams turn dark and vivid, he discovers a set of arcane books titled ‘The Revelations of Gla’aki’ and realises at last how much danger he faces. The presence in the lake is an ancient one of cosmic terror, and its servants—beset with the ‘green decay’—are beckoning him to join them as Gla’aki, the three-eyed being crashed to earth from outer space, rises again from the depths of the ebon lake.

"I wrote “The Inhabitant of the Lake” in 1962, when I was sixteen years old. It was my first attempt to create a Lovecraftian deity—that’s to say, an alien entity taken for a god by its human worshippers. He has become central to the Brichester mythos, my small contribution to the Lovecraft tradition. He started life as Glaaki, but a later revelation made it clear that the correct spelling is Gla’aki, needlessly simplified by the Victorian editor Percy Smallbeam to make it easier for human speech. In almost sixty years Gla’aki’s influence in the world has grown beyond anything I could have imagined as a teenager. He has lent his name to Facebook profiles and Twitter ones too, and has been the subject of songs and games, and depicted by painters and sculptors. An entire anthology, The Children of Gla’aki, was assembled in tribute to him, and I feel touched and humbled by all this. I recently revived him in a novella (The Last Revelation of Gla’aki) and tried to do him the justice I didn’t have in me as a teenager. Now the excellent Alessandro Manzetti and Stefano Cardoselli have adapted my tale into a graphic novel, with splendidly expressionistic art by the latter gentleman, and I’m inspired all over again. You can’t keep a good monster down."